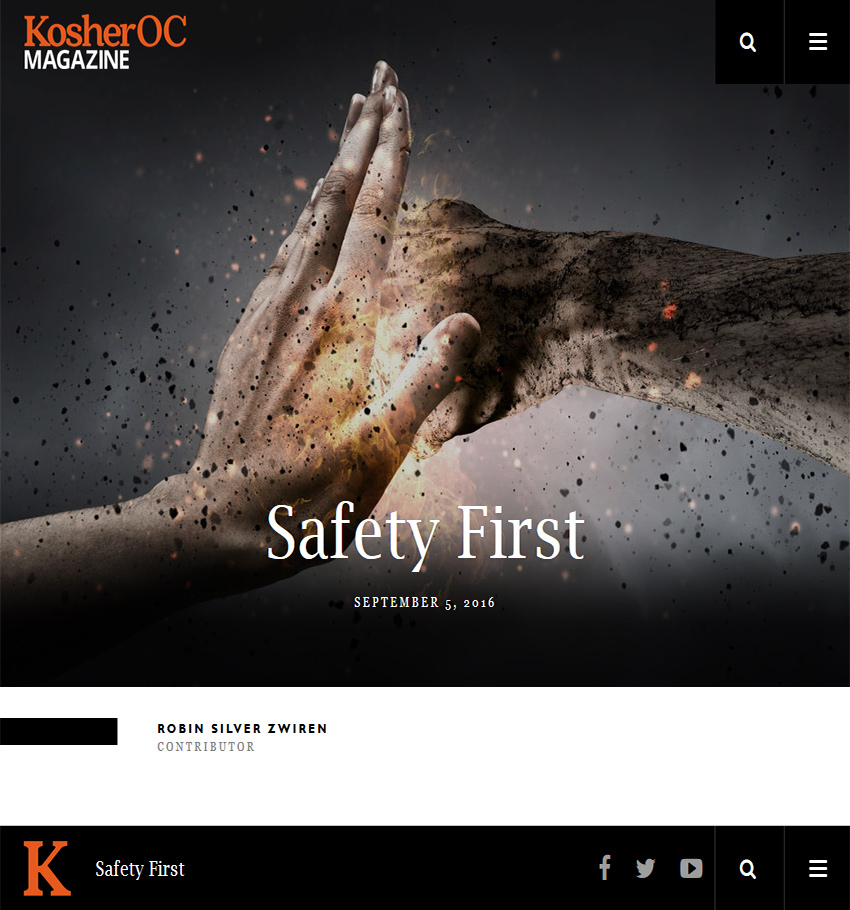 Those who attended the Bullets and Bagels outdoor program on August 18 experienced nothing more harmful than the desert heat. Learning how to use firearms from NRA instructors is always rewarding. They are always willing to show exactly how to hold and fire a weapon, which is essential. Having attended a few B & B events, the instructors are as familiar as the members. The club now has 150 members across Southern California and about 30 percent are female. The group meets monthly and rotates between Orange County and the Valley area locations.

Speaker stresses awareness of surroundings and strategy when carjacked.

The special guest speaker for this event was Alon Stivi of Direct Measures Attack Countermeasures Training (ACT). Stivi, a former member of the Israel Defense Forces, now trains first responders and Navy Seals. He commented on how good it is to see Jews being trained on weapons and how important it is to protect ourselves from our enemies. Stivi said that the real weapon is not the gun but ourselves. He reiterated what we often hear that “guns do not kill; people do” and we must think before we shoot. Unfortunately, there are those who do not.

“Cars are not guns but kill more people than guns do.” Is anyone trying to make cars illegal? How many people drive while intoxicated, whether alcohol or drugs as opposed to how many people shoot to kill? Stivi stated that having a gun is a mindset, and it is unfortunate how not every gun owner has the right mindset. However, the addict mindset is not the most ideal either. 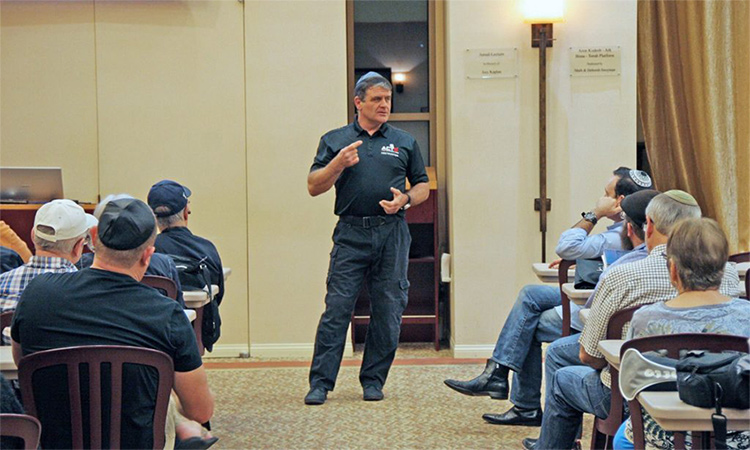 Stivi came to the U.S. 30 years ago after serving in Lebanon. He has seen how the wave of terrorism is not just in the Middle East but everywhere. He has thought about how we all need to prevail to stop terrorism, to fight this violence. Being prepared is taking steps to doing our part. That is a major reason why he wrote the rebuttal for Proposition 63.

Stivi recalled how as a young boy in elementary school he was taught to recognize a landmine, an IED. He believes that the U.S. government is not doing enough to prepare its citizens. We all need to become more aware of even little things, such as a backpack left in a hallway when no one claims it. (I got a chuckle out of the mom who dumped her bag in the middle of the lobby to rush to see her Olympic athlete daughter perform. Her bag was blown up. An Israeli company is in charge of the Rio Security, so this act may have surprised her but not me.) We must not just walk by but must think about whether it may be a bomb. We must take a second look if we see someone wearing a bulky coat when everyone else is dressed for the heat. Nowadays we never know where a suicide bomber may be. Certainly no one in Bakersfield expected to be targets.

Our schools are not open to teach about terrorists, according to Stivi. That would be a “no-no.” That would be labeling, which is, heaven forbid, not allowed. Yet how can we teach U.S. citizens to prepare if we are afraid to state facts. When Stivi stated that the United States have to be more “united,” he got loud cheers from the group. This should be the interest of every citizen, no matter our race, creed or political affiliation.

The fact that 60 percent of the time an active shooter is less than 20 feet away is scary enough. That it takes less than 3 seconds for a shooter to kill only added to our anxiety level. Sitvi stated that there is no time for us to get into our stance, taking steps forward and back to look cool. We must just shoot. This needs training as it would be better to hit our attacker first. We need to train as if for combat, so we know exactly what to do. In Israel schools have security guards and even teachers who may have done army service. In the US this is not the case, so it is even more important for us to not only learn but to teach our children.

Tunnel Vision Target Fixation is common and usual, according to Stivi. He demonstrated how it is important to be aware of our surroundings though, just in case of attack. Chances are that the active shooter would focus on the teacher’s desk or where the class bully sits. If someone turned off the light, the attacker would be confused and unable to aim. Then people could close in on either side of the shooter and disarm him/her. That is certainly a better option than lying in wait and something Stivi teaches to thousands of teachers and law enforcement personnel.

Stivi and one of his instructors gave us an extremely worthwhile lesson on what to do if carjacked. Scenario One: If an attacker gets into your passenger seat, get out of your car. Let the insurance deal with it, but it is better than losing your life. The fact is that 80 percent of people who stay in the car with an attacker will not survive. Another scenario is one in which someone points a weapon at you while you are in the driver’s seat. Slide into the passenger seat and make your exit. The attacker will be preparing to drive and can’t shoot while adjusting mirrors and/or holding the steering wheel. Stivi did mention that stick shifts are less likely to be carjacked than automatic vehicles.

Of course, if you have a loved one in the car with you, the scenario is totally different. If you are still in the driver’s seat, let the attacker in the passenger seat and drive erratically. Chances are that the attacker did not stop to put on his or her seatbelt. If you hit a pothole or ditch, the attacker’s airbag will then deploy. If the attacker is now in the driver’s seat, try to hit him in the neck. Another option is to keep a sharp-edged weapon like a knife or even extra key in the car, so you can be better prepared for any carjacker. At one time 9-11 operators may have said not to attack, but that is no longer the case. Better safe than sorry.

Bullets and Bagels is not a group of people out to kill aimlessly but a group wanting to learn how to aim knowingly — people who believe it is not only a right but a necessity to know how to protect oneself and loved ones. The event was sponsored by OC Guns. Other vendors were Cannae ProGear, City Girl Preppers, Laguna Herbals, Leica Sports Optics, OC Gunsmith, Pelican, Peltor Headsets and the NRA Information booth. It was wonderful to check out all the products, many proudly made in the USA.